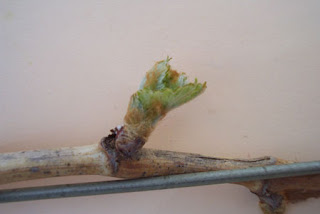 The photograph shows the MAT1 clone of sangiovese at stage 5 of its annual growth.

The Chalmers Nursery description of this clone is:

'The vine has low vigour, with short internodes. The form of tip is half-open. The bunch structure is typical of Sangiovese “Prugnolo” biotype, characterized by a cylindrical-pyramidal form and loose density of berries; but has a large size of clusters, usually shows a physiological alteration: “hen and chicken” (green millerandage). The berry has small dimension and elliptic shape. Good resistance to botrytis.'

Reading the 1999 McKay et al book on growing Italian grape varieties in Australia has me wondering how some of their predictions and homoclime analyses have panned out.

A case in point: a significant reason for cane pruning sangiovese (aside from low basal bud fruitfulness in some clones) is managing frost risk from early budding. While I know some growers cane prune (such as Bryan Martin of Ravensworth) their sangiovese, it would be interesting to see statistics on how these vines are managed across the Australian regions, matched against heat degree days perhaps?

Posted by Paul Starr at 8:50 AM No comments: 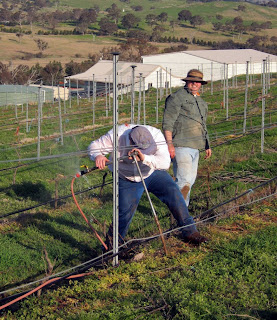 At Quarry Hill, we are part of the way through removing a struggling block of pinot noir and converting it to a planting of mixed varieties that will produce a red Rhone blend.

The photograph shows the use of an about-to-fail planting spear from our grenache planting session last Saturday. Four rows of BVRC38 clone grenache sourced from Elite Nursery in the Barossa went in, with four more to go next weekend. We have also planted two rows of cinsault (old vine selections), and prepared a row for grafting to roussanne. This is on top of the initial grenache planting at the top of the hill we put in in 2009.

When completed, the block will supply grenache, shiraz (Great Western clone), cinsault and roussanne. With a planting of mataro/mourvedre going in below the 2006 plantings of tempranillo, we should have the makings of a decent volume of a hopefully good red Rhone blend.
Posted by Paul Starr at 3:12 PM 1 comment:

The Chalmers family have done a lot for alternate grape varieties in Australia. Their old Chalmers Nurseries business brought many interesting grapes to field trials, to the market, and then to plantings around the country. Sagrantino (MAT1 and MAT4 clones) was one of their imports, with, if I recall correctly, the first vintage being released being the 2004.

This 2005 vintage sagrantino was made by Sandro Mosele at the Kooyong winery, but the fruit came from the Chalmers vineyards at Euston in NSW. These young plantings were the source of the sagrantino fruit I bought in 2007 for a trial make in part-amarone process.

The fruit in the 2005 is starting to thin out a little, though still offers preserved cherry and dark bramble berry characters, as well as an attractive, dusty, bitter chocolate note. It is a wine where the flavour of fruit and the taste of tannin are hard to separate. And it does have tannin. Serious, chewy, drying tannin.

I was in the mood for tannin, to go with a full-flavoured pork ragu and fettuccine, and this hit the spot. Bottled under Diam, if you have any of these left, I'd suggest drinking up this year before the fruit fades further. For what it's worth, I reckon this is a wine that would have presented better under screwcap than Diam.
Posted by Paul Starr at 2:45 PM 1 comment:

The monthly tasting group, sans one, did an informal session last night at the Beijing Palace in Hawker. The place was packed with moon festival folks and the kitchen was really pumping out the dumplings and Schezuan gear. It is a no-pretensions joint, in the Canberra gem hidden in small shops style, where they make the dumplings by hand, to order.

Unlike the usual sessions, where one person provides all the wines and there can be a bit of a theme, this time was 'everyone bring a bottle'. Mr Lole kicked off proceedings with an excellent 1996 Veuve Grand Dame. We then hit a speedbump with a sherried 2003 Leeuwin Estate Art Series riesling, before Mr Lole pulled a rabbit with a stonking aged German riesling from the Mosel that I could have sworn was a gewurtz blend, so strong and clear the hit of turkish delight. Boiled white fish dumpling, pan fried pork dumpling, steamed vegetarian dumpling: all disappeared at high speed. [update: the riesling was a 1994 Maximin Grunhauser MSR Abtsberg Auslese Fuder 45.]

Then we had some 2005 Lillydale Estate chardonnay and a cold dish of Szechaun spiced poached chicken. I liked the Lillydale, but the riesling handled the heat of the spices better.

After that the dishes started rolling in: braised pork in foil, stir fry beef & vegetable, sizzling bean curd, squid in spicy peppery salt. Brett provided a lovely bottle of Yalumba's Signature (1996?), which went really well with the pork and the beef & vegetables. The additional wine from Tammy (2001 Ashton Hills sparkling shiraz) didn't get opened, but reckon it would have also worked well with the food.

Great night, $35 a head, no pretensions venue (did bring glasses though). Like it.
Posted by Paul Starr at 9:14 AM No comments:

Blind tasting of 23 Canberra District shiraz from the 2009 vintage

Last night I got to do a fascinating horizontal blind tasting of 23 Canberra District shiraz wines from the 2009 vintage. First, a big thanks to Len Sorbello and the Winewise crew for putting this on. I won't post scores, and will wait until Winewise publishes before I make specific comments on particular wines, but it was a fascinating exercise. I thought the idea of a wine publication conducting a horizontal tasting, but inviting winemakers and growers involved in producing the wines to come along and participate, was a really good one, and not something I have seen before. Seeing the similarities and differences in fruit flavours and aromas across sub-regions, makers and styles was eye-opening for me. Thankfully, I could pick the Quarry Hill wine out of the blind lineup. It is a strong vintage for Canberra, including for shiraz, with the average standard of the wines high.

Well done Winewise for doing this, and Frank Van de Loo from Mount Majura for hosting. Made me feel lucky to be involved in Canberra District wine.
Posted by Paul Starr at 3:36 PM No comments:

Hardly the traditional Sicilian sardine pasta, but this went well tonight with pinot noir of the acid/tannin/structure variety (Quarry Hill 2008 pinot noir to be precise).

Take half a bulb of Florence fennel, dice it fine and sweat off in olive oil with a little salt (add some garlic near the end). While the fennel cooks slowly, soak some sultanas (could also use currants) in marsala (I used a dry marsala). Take some good bread, for me it was two small slices from the end of a Knead sourdough, blitz to crumb in a food processor, spread on an oven tray, sprinkle with olive oil and roast off in the oven until the crumbs go mid to dark brown. Spread on a plate to cool off the pangrattato.

Cook off some oricchiette (ear pasta) and when nearly done, add to the fennel around 8 chopped anchovies, the drained sultanas and a bit of something green (I used a bit of leftover cooked english spinach) for colour, plus some of the pasta cooking water. Toss the drained pasta through the sauce over very low heat until it takes up some of the liquid. When on the plate, top generously with the pangrattato and enjoy with something crisp and acidic to cut against the oil and earthy flavours.
Posted by Paul Starr at 9:35 PM No comments: