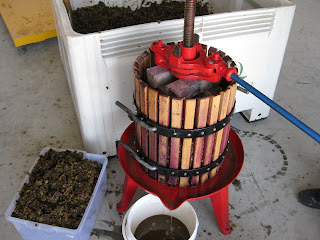 I have been working on a vin santo (ish) trial project for a while now. In 2010, savagnin fruit from our 2006 plantings at Quarry Hill were allowed to ripen a little further than for a crisp, dry table wine. The grapes, still with sound skins and good acid, were transferred to wooden drying racks, which were then stacked into wheeled towers. Half a ton of fruit made two drying stacks.

The fruit took a couple of months to dry, with regular checks, rack by rack, to remove any grapes that looked dodgy (an especial eye for sour rots). Drying rates were checked against a series of tagged sample bunches, weighed periodically through the drying.

The final dried weight of the fruit had dropped by around 45%, which is probably a bit too far. I would try 30%-35% next time (as I did in my 2007 trial of drying sagrantino). The dried fruit was then crushed by feet before being bucketed into the tiny manual basket press above. The acid, honey and raisined juice was given some time to settle before being racked to ferment.

So far, much of the techniques used were as common to French vin de paille wines as they are to Italian vin santo. The next step was to both ferment and age the thick juice (27 baume) in an oxidative environment. Lacking the small, cigar-shaped caratelli barrels used for much vin santo, I used two small plastic fermenters and then into glass demi-john for conditioning - both vessels with significant headspace, as with vin santo.

The wine took about 10 months to slowly tick through a ferment in ambient conditions, no heating or cooling. It has been racked twice, some off-spec juice discarded, and all remaining 44 litres of it now need a final tidying up before bottle.

So does it taste like vin santo, or a French vin de paille, or something else entirely? Tasting it earlier this month, I'd have to say bits of all three. Depending on how it negotiates the last steps to bottle, there could be half bottles of something distinctive to sell, or even give away. This has certainly whetted my appetite for looking deeper into Italian vin santo, as well as helping appreciate the work involved in taking half a ton of fresh grapes into 40-odd litres of finished wine.
Posted by Paul Starr at 12:26 PM