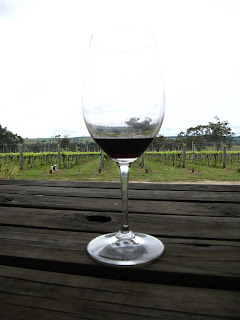 Got back last night from a weekend in Northern Victoria. The major drawcard was the first open day at Castagna in Beechworth. I consider the Castagna La Chiave straight sangiovese and the Un Segreto 'super-Beechworth' syrah-sangiovese blend some of the top Italian wines in Australia and have been purchasing Castagna wines for several years.

But the trip also meant I could look at the Italian wines of Chrismont at their new cellar door in the King Valley, and then cross the Hume Highway to look at the 1919 vines trebbiano from Booths Taminick Cellars at Glenrowan.

Highlights for me:
- the 2004 La Chiave sangiovese from Castagna has developed beautifully with years of growth still to come, though the Genesis syrah and Sparkling Genesis were the standout Castagna wines
- the Chrismont prosecco had all the dangerous drinkability of good cava, but their Barbera was the most impressive Italian in the range
- at $14 a bottle, sourced from trebbiano vines planted in 1919, with some attractive fruit and flesh on the midpalate, the 1919 Taminick Cellars trebbiano seriously over-delivers.

Each visit deserves a separate write-up, but the two days as a whole confirmed the prospects of three northern Victorian regions to make distinctive and interesting wines from Italian grape varieties.

The image, taken by Tammy, is of the 2008 Genesis syrah, looking out to the Castagna vineyard.
Posted by Paul Starr at 7:03 PM