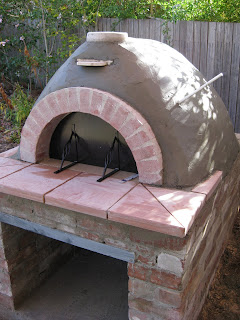 I currently do a bit of cooking in a stone-framed fire pit surrounded by gravel out in the garden. Kind of a permaculture meets Japanese gravel meets Tuscan grill kind of thing. Mounds of dried prunings from a bay tree make for excellent grilled meats, eggplant and capsicum.

For a while now, I've been looking at an area under the bay tree as somewhere to build a wood fired oven to cook pizza, breads and other things. Not being especially handy, I have been keeping an eye on the workshops offered by Alan Watt (www.woodfiredovenworkshops.com). Alan used to teach ceramics in Fine Arts at the Australian National University, and running these two day oven workshops has been a bit of a retirement project.

The workshop we did last weekend (a group of 20 or so people) built two ovens over the two days. One a high-tech oven (permanent placement, dome covered with high temperature concrete and a thermal blanket), the other a low-tech earth oven on a sort of portable metal frame. A 400kg weight counts as sort of portable to me.

The photo is of the high tech oven as it looked at the end of day two.

I had been thinking of building a basic brick oven, but have learned a lot from the course and am now thinking of doing something more like the two ovens we built. A good weekend to be learning something new in stunning autumn weather, with good pizza at the end of it.
Posted by Paul Starr at 7:10 PM